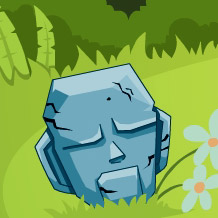 Fireboy and Watergirl Amazon Adventure is another spin-off of popular games about young travelers exploring mysterious temples. After exploring unknown lands in New Adventure game, our favorite characters found themselves in the Amazon. It's beautiful but also a dangerous place!

The game introduces many new elements of the gameplay against the original titles. The most significant change is an option of playing up to 3 players at one time. An unknown green friend of Fireboy and Watergirl joined our travelers on this dangerous journey. The Amazon is full of wild animals and unfriendly natives who will not stand and watch you collect treasures in their lands! You can deal with many animals using hunting traps, but not all of them can be caught! It's best to deal with the natives by avoiding them, but if there's no other option, you must find a special artifact that will stun them for a while, and you will be able to go further safely. You'll finish the level when you collect all the diamonds visible on the screen. However, it doesn't matter who collects them. Regardless of the diamond's color, it can be collected by each character. Also, you don't have to worry about mixing fire with water anymore, because water lakes will not hurt Fireboy.

Controlling the characters is slightly different than in the original games--also because the game allows you to play up to 3 players. You can move Fireboy with the keys A, W, D, and place the traps with S. The Watergirl can be controlled with cursors and to move the new green friend use the keys J, I, L, and K for traps. This game contains a full singleplayer mode in which you don't need to control more than one character at the same time.

When you discover all secrets of the Amazon, and you get tired of the heat, you can cool down a bit by exploring the cold chambers in Fireboy and Watergirl in The Ice Temple.

Fireboy and Watergirl in Magic Forest