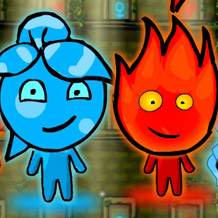 Angry Icegirl and Fireboy is a fan-made game which combines adventures in the Forest Temple with another popular game, Angry Birds. If you like the first part of the official game, find out what new challenges have been prepared by the angry spirits.

This is a completely different game from other Fireboy and Watergirl titles which you've played so far. Instead of solving puzzles and jumping on platforms, your goal is to aim well and throw our favorite characters into the right spirit. Just as Fireboy and Watergirl have their colors, so are the spirits appear as red or blue. Each character can only strike the spirit that corresponds to its color. If you've played Angry Birds before, the mechanics will seem very familiar to you. Your task is not so easy. Spirits are very clever and getting to them may be very problematic. Fortunately, Fireboy and Watergirl (here Icegirl) have special abilities that will be useful in defeating the best-hidden enemies. Fireboy can bounce off the walls and explode when you click on the screen. Watergirl can fly in the direction you want. Take advantage of these abilities and defeat all ghosts to complete the level!

You can play using only the mouse. It's designed for a single player, but if you want you can always play with a friend or family member and take turns controlling your favorite characters!

Fireboy and Watergirl in The Forest Temple is the first game in the series about young travelers discovering the secrets and treasures of various temples. If you're curious what inspired the author of Angry Icegirl and Fireboy, you can play the original game any time you want!