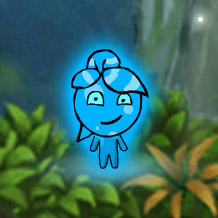 Icegirl and Fireboy Forest Energy is a fan-made game based on popular Fireboy and Watergirl game series about young travelers discovering the secrets of mysterious temples. In this spin-off, our favorite characters have gone to a dangerous forest which will test their movement skills.

This place is even more dangerous than the temples you visited in official games. You will not find any puzzles here, but tough arcade challenges. The path that Icegirl and Fireboy are traveling on today is in a horrible condition, and every element of it collapses shortly after someone gets on it. At the same time, the collection of all diamonds is mandatory, not optional as in games from Oslo Albet. You have to collect all the diamonds visible on the screen to be able to go to the next level. Twenty challenging routes are waiting for you, and if you want to run through them in one piece, you have to synchronize your moves perfectly!

Unlike the official titles, here one of you controls Watergirl (here known as Icegirl) using cursors, and the other of you can move Fireboy using the keys A, W, D. Unlike the adventures of discovering temples, it's almost impossible to play "Forest Energy" alone. The completion of almost all stages requires precise synchronization in characters' moves and even for two players isn't an easy task. Anyway, if you want to play alone, you can always try.