Fireboy and Watergirl 2 in The Light Temple
Play 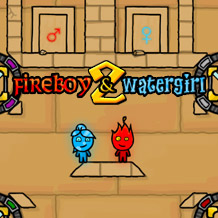 Fireboy and Watergirl in The Light Temple is the second part of a game series about travelers wandering through mysterious temples full of puzzles and treasures. This time they have come to a place where light not only reveals the way but also allows them to create passages between platforms.

A new place, new puzzles, but the goal's the same. You two must help these young travelers safely pass through each of the temple's chambers. As in the previous part of the game, this time you also have to be careful to not mix water with fire. Fireboy should not touch water lakes, while Watergirl must avoid lava; otherwise, their journey will end immediately. However, they will not hurt each other, so they do not have to avoid each other. You also have to watch out for green goo, which is just as dangerous for Fireboy as for Watergirl. The Light Temple is full of entirely new puzzles that you have not experienced in the Forest Temple. Using mirrors, you can direct beams of light to detectors that will open new passages. Some of the mirrors are placed in boxes, and you can move them, while others are an integral part of the temple. However, some of them can be rotated, and this creates a lot of exciting new puzzles that you have to deal with if you want to discover all the secrets of this place!

One of you can control Fireboy using arrow keys and the second of you can control Watergirl using keys A, W, D. Of course, you can try to play alone, but it's a much more difficult challenge. Besides, one of the most significant advantages of Fireboy and Watergirl games is the possibility of having fun with a friend or family member!

You can choose between two versions of the game - HTML or Flash. Practically it is the same game created in other technologies. HTML version does not need additional plugins to play, while Flash version requires Adobe Flash Player installed and enabled. HTML version is, therefore, more convenient. However, it contains much more ads published by the game's developer. The choice is yours!