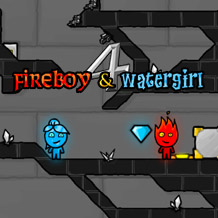 Fireboy and Watergirl in The Crystal Temple is the fourth part of the adventures of young travelers discovering the secrets and treasures of mysterious temples. After exploring the cold chambers of the Ice Temple, Fireboy and Watergirl have to face the magic crystals, through which they can teleport themselves as well as objects found in the temple.

These two young travelers need help from two of you to explore this place safely. The Crystal Temple introduces new mechanisms that can be exciting, but in many chambers, portals can be used against you if you aren't careful. Some portals must be activated. Remember that depending on which side you enter the portal (light or dark side) you'll move to another place. Some portals may teleport you to dangerous places! Keep in mind that you still shouldn't mix fire with water. Fireboy cannot touch water lakes, Watergirl must avoid lava, and both will finish their journey immediately after interaction with green goo! The game also contains all mechanics from the previous parts of the series, so get ready for new challenges with beams of light and obstacles covered with snow and ice. If you have a problem with the current level, you can always watch our walkthrough which will reveal all the game's secrets. You can find the video below.

The gameplay, despite new elements, still looks the same. One of you controls Fireboy using cursors and the second of you is responsible for Watergirl, which can be controlled by A, W, D keys on your keyboard. You can still play alone, but the biggest fun begins with a friend or family member. Besides, playing alone can be very difficult and frustrating.

Use the buttons at the top to select the game version. Html version allows you to play without any additional plugins to your browser. However, it contains much more advertisements emitted by the game's author. Flash version requires Adobe Flash Player, but displays only two ads right after starting the game.

You can return to previous adventures of Fireboy and Watergirl anytime by choosing one of the games below. Fireboy and Watergirl 5 - Elements is the latest installment of the series, which was released recently. You'll find there all the temples already known from the previous parts as well as completely new places to discover.