Fireboy and Watergirl 3 in The Ice Temple
Play 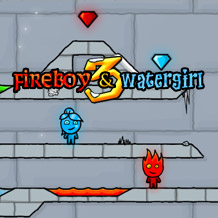 Fireboy and Watergirl 3 in The Ice Temple is the third installment of the popular game series about adventures of young travelers wandering around undiscovered temples full of puzzles and mysteries. Each of the places they visit is different. This time they decided to explore cold chambers of the Ice Temple.

As in the previous games, you two have to help Fireboy and Watergirl safely discover the whole temple. Remember that you can never mix water with fire. Fireboy will end his journey immediately if he touches the water lakes. Watergirl should not touch the lava. Both of them should also avoid green goo. However, you don't have to worry about interactions between characters. They will not hurt each other. The Ice Temple reveals also the new advantages and weaknesses of these young travelers. Snow-covered and icy platforms will be different challenges for each of them. Fireboy slides on snow, can't climb slopes, and he needs Watergirl's help in freezing water lakes to be able to go through them. Watergirl is slowed on snow which in some places can be very problematic and requires assistance from Fireboy. Neither of them can jump on ice nor snow. There're also new timed buttons that will unlock some mechanisms only for a short time. All this in addition to the tools known from previous games makes you face an even more significant challenge than before!

Controlling characters is easy. Fireboy can be controlled by arrow keys and Watergirl by W, A, D keys. The game was designed for two players, but it's possible--although much more difficult--to play alone. If you spend your free time with a friend or family member, this game will provide you a lot of fun!

You can choose between two versions of the game - HTML or Flash. Practically it is the same game created in other technologies. HTML version doesn't require additional plugins to play, while Flash version requires Adobe Flash Player installed and enabled. HTML version is, therefore, more convenient. However, it contains much more ads published by the game's developer. The choice is yours!