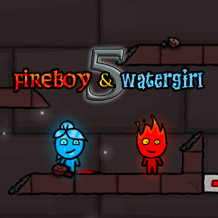 Fireboy and Watergirl 5 - Elements is the fifth and at the moment the final part of the popular series of games for two players about young travelers discovering the secrets of mysterious temples. This time Fireboy and Watergirl move between different temples, including those already visited in previous installments of the series. You'll also explore completely new places like temples of fire, water, and air.

The four previous parts of the game have introduced an enormous amount of mechanisms that will make your travel through visited temples quite difficult. "Elements" contains all of them and combines them creating the most significant challenge with which you will face. The most important thing is to never mix fire and water. Both characters will not hurt each other, but any other source of their opposite element will end their journey immediately. Fireboy must avoid water lakes, and the Watergirl cannot touch the lava. Also, both should watch out for the green goo. As you remember from previous games, Fireboy and Watergirl can move objects and activate different switches. Thanks to that they can change the angle of light beams and direct them to detectors or activate crystal portals that will teleport them to a completely different place. Also, they will again have to face chambers covered with snow and ice, which limit some movements of them.

You can control your characters using cursors (Fireboy) or keys A, W, D (Watergirl). It's possible to play alone, but it may be tough. Playing together with a friend or a family member will give you much more joy and satisfaction in achieving your goals together!

Unlike its predecessors, this version is available only in HTML version and from time to time displays the ads emitted by its creator. Adobe Flash is less and less used in games because new technologies like HTML are much more efficient and safe, and above all, it doesn't require additional plugins for your browser.