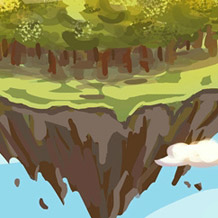 Fireboy and Watergirl New Adventure is one of the fan-made games about young travelers usually engaged in exploring mysterious temples. This time, the two set out to discover unknown lands, which may be even more dangerous than the places they have already visited.

This is not a game from the official series, that's why the gameplay is slightly different from the one you know from games like The Forest Temple or Elements. Fireboy and Watergirl again have to overcome many levels on which they will find many traps and treasures. Here, gathering all the diamonds is necessary to complete the level. To do this, you two must cooperate, but you will not find as many complex puzzles as in the temples. Both characters have also gained a new ability to turn into a ball, thanks to which they can get to places with very small entrances. The proper use of this ability is crucial to complete all 24 levels. Remember to watch out for spikes, holes, and never mix fire with water!

Controlling the characters here has been reversed from the original games. You can move the Watergirl with the cursors, while the Fireboy can be controlled by the keys A, W, D, S. The down cursor and the S key are used to turn into a ball and also to return to the standard form. This game has also been designed for two players, but playing alone doesn't make problems on most levels.